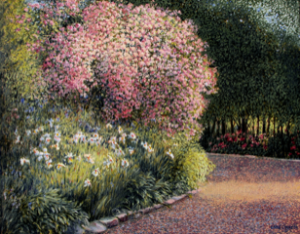 Boxford, MA - Earline “Ernee” L Way, 90, of Boxford, passed peacefully at Kaplan Hospice House, Danvers, on April 28.  She was born in 1931 in Savannah, GA., to the late Earl E Earnest and Freda L (Wise) Earnest  Although a daughter of the south she proudly called many of our countries' towns her home. A multi-talented creative individual she developed her Fine Art Career as a painter to be recognized by her peers.  She has works hanging all over the world. She showed such early promise at the age of five drawing portraits on her grandfather’s office shades and anywhere she could find some paper and a pencil.  A painter with over 65 years of experience she began her training at the age of nine in private instruction.  She studied art at the University of Georgia, the Montserrat School of Visual Art and enjoyed six years of training with Copley Master Robert Scott Jackson.  She went on to teach and her daughters Candy and Robin followed her footsteps. Ernee’s work has shown at the Salmagundi Club, New York; the Catherine Lorillard Wolfe Art Club, New York, American Impressionist Society, the Copley Society and locally at Northshore Arts Association and many shows in Galleries across New England. To learn more about Ernee’s career visit www.impressionisticways.com In addition to her art pursuits she raised five children with her husband the late Robert R Way., of Boxford, MA
Ernee is survived by 5 children Robin Foster, Holly Ransleban, Candy Way and husband Francis S Pierce, Christian Way and his wife Donna, and Mathew Way. She Leaves 11 Grand Children and 10 Great Grand Children with one on the way.

In lieu of flowers a contribution to : the Northshore Art Association Awards program in Memory of artist Ernee Way Website https://nsarts.org (see Link Below)